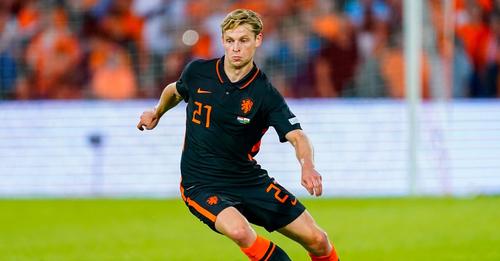 Frenkie de Jong remains Man United's priority target and the club are set to submit an improved bid to Barcelona. Manchester United are expected to formally submit an improved bid to Barcelona for Frenkie de Jong imminently.
United made an opening offer of €60million (£51.64m) including add-ons that was rejected by Barca, who are unwilling to suffer a loss on a player they signed for £65m three years ago.
Barcelona privately concede they cannot obtain the outlandish €100m Spanish outlets have quoted as their valuation of De Jong, 25, when they are prepared to sell him. Barca are believed to want a guaranteed €75m (£64.55m), with add-ons to ensure De Jong's overall fee surpasses what they paid Ajax to sign him.
New United manager Erik ten Hag has prioritised the signing of De Jong and United have spent the majority of June attempting to negotiate a transfer for the Netherlands international.
United sources say they are "negotiating hard" for a fair deal for De Jong as they believe that had they yielded to Barcelona's initial valuation it could have affected their capacity to strengthen other areas of the squad. Ten Hag also wants to sign Christian Eriksen, Ajax forward Antony, a centre-back and a back-up goalkeeper, with Daniel Bachmann of Watford under consideration.
United insist they have fall-back targets with a lower valuation than De Jong should they fail to prise the Dutchman from Barcelona but they are determined to sign Ten Hag's priority target.
The MEN reported last month United approached Barcelona on May 11 - the night Ajax secured the Eredivisie title. United football director John Murtough flew to Amsterdam the next day to meet Ten Hag and then attended additional recruitment meetings in London.
Ten Hag reached out to De Jong, whom he developed for 18 months at Ajax, to assuage his concerns about joining United. De Jong is contracted to Barcelona until 2026 and has described them as his "dream club" but the emergence of La Masia prodigies Pedri and Gavi, as well as Barca's financial problems, could see his Camp Nou career end after only three years.
Next Post Previous Post
No Comment
Add Comment
comment url