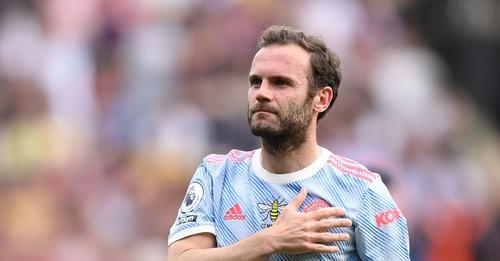 Juan Mata will leave Man United when his contract expires at the end of June. Juan Mata has shared an emotional farewell message on social media after his exit from Manchester United was confirmed last week.
Ahead of his contract at Old Trafford expiring at the end of this month, United have announced that the Spaniard will be leaving on a free transfer on June 30. It will mark the end of the midfielder's eight-and-a-half-year spell with the club.
United have plans to make significant changes to the landscape of the first-team squad this summer and several big-name players will join Mata in leaving the club later this month, including Paul Pogba, Jesse Lingard and Edinson Cavani. Their departures will reduce the size of the club's wage bill and pave the way for new additions to be made to manager Erik ten Hag's squad.
Although mass changes need to be made this summer, Mata's exit from Old Trafford was always going to be emotional. He joined the club back in 2014 and turned out to be a firm fans' favourite, giving 100 per cent every time he sported the famous red shirt.
He made 285 appearances for the club, scoring 51 goals and grabbing 47 assists. He also won four trophies during his United career, including the FA Cup and the Europa League.
Following confirmation of his departure, the Spaniard has now issued a heart-warming message via a video on his Twitter page.
"It has taken me some time to process the change that is happening in my life and this is a message that for many moments over the last years I never thought I would be writing," Mata said. "But, of course, all good things come to an end and my time as a Manchester United player has just finished.
"It would be impossible for me to express through this text all the feelings that I have been experiencing over the last few weeks, but to sum it up, I would like to say that I am the proudest man in the world for having represented this unique club for the last eight-and-a-half seasons. It is something that I would never have dreamed of when I was little, as it felt too distant for a kid in Spain to one day, one day play for one of the best clubs in the history of football.
"But sometimes reality exceeds dreams. As I am writing these lines today, I couldn't be more grateful with what my career has brought me so far and I'm as excited as that little kid about what the future might bring from now on.
"The same passion for playing football as that kid's remains inside of me. It goes without
saying that I want to thank every staff member that works in the club and that makes it so special... every manager and every teammate that I have crossed paths with during my time in Manchester.
"We haven't experienced the best period in the history of the club but we did have some amazing memories along the way in the form of trophies and special moments together that will stay forever in my mind.
"Thank you all - I will miss you. For you, our supporters, I don't really find words to describe how grateful I am and how special you've made me feel. I feel very loved and this is something for what neither me nor my family will ever be thankful enough.
"Manchester is and will always be a massive part of my life, on and off the pitch, and I really feel like an adopted Mancunian. Living here and understanding what it means to be part of this singular place in the world and its culture, it's something truly special.
"I feel I belong here. I wish nothing but the best to the club and the new manager, and I really hope this is the start of a new era full of great football, trophies and enjoyment for you, our fans. It is nothing more than what you deserve and nothing less than what this football club should be about.
"This is not a goodbye, but a see you soon, as I will keep coming to Manchester whenever I can. But for now, from the bottom of my heart, thank you very much for letting me be part of your history. I am truly honoured and proud, and I will always be one of you."
Next Post Previous Post
No Comment
Add Comment
comment url